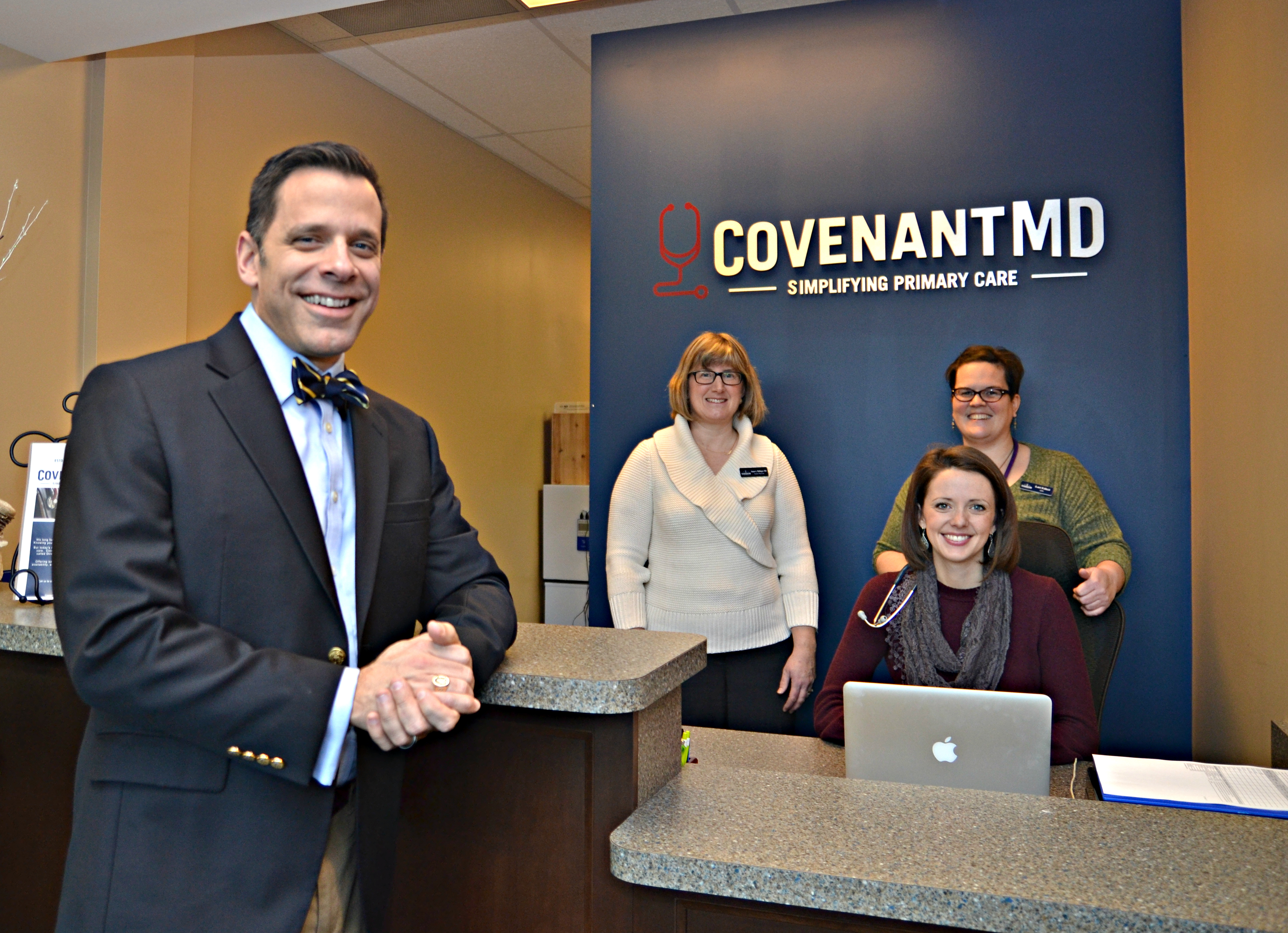 Your first clue that something is very different about CovenantMD, is when you call the office and after the first prompt to “Press one for Dr. Patrick Rohal” you are directed right to…Dr. Patrick Rohal. The surprise of being so immediately connected to your doctor, or to his nurse Hannah, is so great that you skip a beat, or two, to get used to the idea. That was SCORE Lancaster – Lebanon mentor, Hugh Mc Master’s reaction in May of 2015, when he first met Patrick as a new client, and learned about his plans to launch Lancaster’s first Direct Primary Care practice.

Direct Primary Care is an alternative primary care payment system in which patients contract directly with their doctor by paying low monthly fees. That means that Direct Primary Care practices do not take insurance (though they think it remains important for every patient to continue to carry health insurance).  CovenantMD has monthly fees ranging from $10 for children to $80 for seniors. Dr. Rohal offers: same or next-day visits of 30 to 60 minutes, in the office or at the patient’s home or work site; after-hours care for urgent and emergency issues; and 24/7 access via cell phone, text, email, or Skype.

Prior to opening CovenantMD, Dr. Rohal laid the groundwork carefully for his practice, and part of that planning was to connect with SCORE Lancaster – Lebanon  to request a mentor.

“Having no business experience, I knew that sound advice would be a key part to being successful.  I thought that SCORE would be an ideal resource (and that turned out to be the case).  The most pressing need in the beginning was feedback about my business plan.”

Dr. Rohal met with his SCORE mentor almost a dozen times after that initial introduction in May of 2015.

“Patrick came with a well-developed plan and sufficient funds to capitalize the start up.  He had done significant research and the written business plan was comprehensive.  I think the single biggest contribution I could make was Validation.  It seemed like a viable idea and Dr. Rohal was disciplined and committed.  In the end, he believed in this concept of patient care and we agreed now was the time to try it.  No amount of market testing and focus group meetings would substitute for taking the leap.  He has successfully launched his practice and has grown his income to match his prior income but in a practice that aligns with his health care mission and values.”

CovenantMD opened in January of 2015, pushing against the significant trend of roughly 70% of doctors now employed by health systems, or large medical groups. Though CovenantMD did not stay solo for long. The concept proved so popular that Dr. Rohal’s patient panel quickly filled to capacity, and Dr. Susan Mellinger was brought on in June of 2017 to begin seeing CovenantMD patients of her own.

“The benefits for someone starting up a business, coming to SCORE Lancaster – Lebanon, would be to have mentoring guidance for the very complicated process of starting a business, from the standpoint of a business plan, and just gaining the confidence to implement your dream & vision, for whatever it is you wish to do.”

As Patrick’s dream & vision of Direct Primary Care for patients, of all ages, continues to grow here in Lancaster, he will enjoy the regular guidance and support of a SCORE Lancaster – Lebanon mentor.